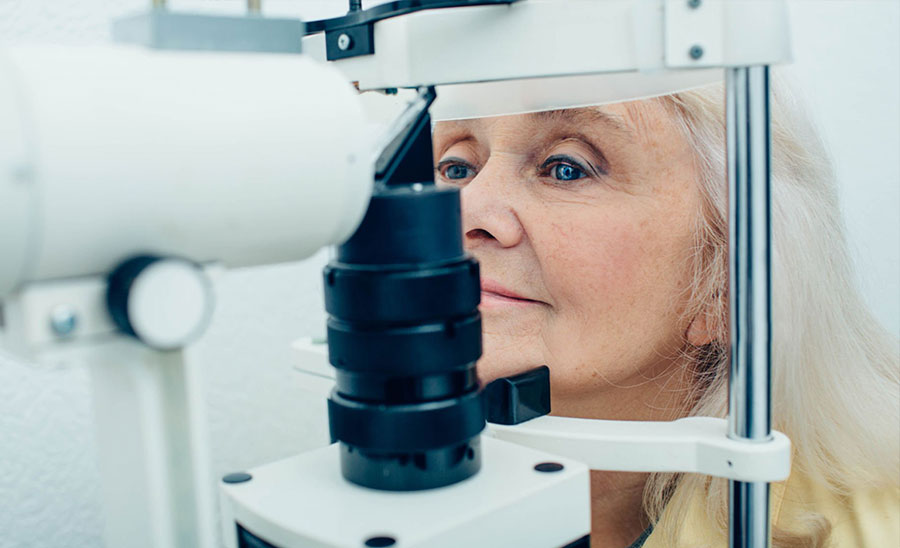 Glaucoma is a group of eye diseases that can cause vision loss and blindness by damaging a nerve in the back of your eye called the optic nerve. The symptoms can start so slowly that you may not notice them. The only way to find out if you have glaucoma is to get a comprehensive dilated eye exam. There’s no cure for glaucoma, but early treatment can often stop the damage and protect your vision.

What are the symptoms of glaucoma?

Am I at risk for glaucoma?

Anyone can get glaucoma, but some people are at higher risk. Currently, more than 3 million people in the United States have glaucoma. The National Eye Institute projects this number will reach 4.2 million by 2030 – a 58% increase. You’re at higher risk if you:

Regular eye exams are important!
The best way to protect your sight from glaucoma is to get a comprehensive eye exam. Immediate treatment may help to prevent unnecessary vision loss.

Various medications are sometimes useful in treating glaucoma. Beta-blocker eye drops may reduce the amount of fluid produced by the eye. Prostaglandin analogs and alpha-2 agonists may also lower intraocular pressure by increasing outflow. No treatment can restore vision already lost to glaucoma.

DURYSTA™ — A Single Implant for Several Months of Glaucoma Relief

DURYSTA™ lowers intraocular pressure for those with open-angle glaucoma (OAG) or ocular hypertension (OHT) by approximately 30%. The 10mcg bimatoprost implant is the first intracameral, dissolvable solution to provide sustained release to reduce intraocular pressure (IOP), providing an alternative to patients who struggle with the treatment options, such as topical drops. Patients generally see improvement within a 12-week period.

The single-use implant is inserted between the iris and the endothelium of the cornea. As the implant dissolves in the eye, it delivers medication to reduce pressure and inflammation, helping prevent optic nerve damage and vision loss.

Please speak to your ophthalmologist if you think DURYSTA™ is right for you.

The doctor may recommend SLT (Selective Laser Trabeculoplasty), a laser treatment for open-angle glaucoma that can be performed in the office to reduce pressure within the eye. SLT targets only specific cells containing the pigment melanin. This treatment lowers pressure by stimulating the body’s healing response, which increases the drainage of fluid from the eye.

The SLT procedure takes only a few minutes to perform. Before the procedure begins, drops are placed in the eye to prepare it for treatment. After the treatment, the doctor will prescribe anti-inflammatory eye drops. Many patients experience a drop in pressure within a day of the procedure.

It is estimated that more than 3 million Americans have glaucoma, but only about half are actually aware of it. Glaucoma strikes without warning and without symptoms. It is sometimes called the silent thief, because it can develop slowly and often is not diagnosed until permanent vision loss has occurred.

Currently there is no cure for glaucoma, but it can be treated. If detected early enough, glaucoma can often be managed with medication or surgery and further vision loss may be averted. But the best prevention is getting an annual eye exam from your ophthalmologist.

Endoscopic CycloPhotocoagulation (ECP) is for those who:

ECP is an exciting development in the management of many types of glaucoma including the more common open-angle glaucoma and narrow-angle glaucoma. ECP is performed on an outpatient basis. In this procedure, the ciliary body of the eye, which creates fluid, is treated with a laser. This reduces fluid production that in turn, reduces the pressure within the eye. The ciliary body is a small gland running around the circumference of the eye located behind the iris.

ECP allows the surgeon to view the area through an endoscopic camera, which aids in the very precise placement of the laser beam used for treatment.

Endoscopic CycloPhotocoagulation is often performed on patients at the time of cataract surgery. It can also be performed on those patients who had SLT or ALT laser procedures, glaucoma filtration surgery or other surgical procedures that were not successful at controlling the pressure.

ECP has proven to be an effective way to reduce pressure within the eye. Studies have shown that the majority of patients have their glaucoma medications reduced or completely eliminated after the procedure, reducing their risk of loss of vision from glaucoma.

The effect of the surgery may wear off over time, but the majority of patients have their pressure reduced and many can eliminate their need for glaucoma medications. However, this procedure and other glaucoma surgical procedures do not restore lost vision. Serious complications with Endoscopic CycloPhotocoagulation are rare, but like any surgical procedure, it does have some risks. Prior to your procedure, you will be given additional information that will allow you to make an informed decision. Be sure you have all your questions answered to your satisfaction.